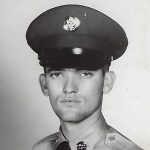 Jerry loved to talk about the early years of growing up in a simpler time. He started his first job at 10 years of age to help the family and learned the value of a dollar very early on. Jerry served his country proudly in the United States Army during the Korean War earning a Good Conduct Medal.

He was a 40-year member of the American Legion Post #315 in Brooklyn, Mich., where he served as a Commander. Jerry worked for Ford Motor Company’s Wayne Truck Plant retiring after 30 years. He was proud of his accomplishments and being a part of building the Ford Bronco. In his spare time, he loved to golf, mow the lawn or do anything to be outside, and go to the casino. In his later years, he enjoyed visiting Country Market daily so he could chat with his friends and “pick up a few items”. Above all he loved to spend time with his family. He will be missed by all who knew and loved him.

His family . . . Jerry will be missed by his loving wife of 53 years, Miriam; his two sons, Michael Clark and Dan (Cindy) Clark; his daughter, Norma Jean Clark; two brothers, Eddie and Ronnie Clark; a sister, Edna Pennock; seven grandchildren; six great-grandchildren as well as many nieces and nephews. He was preceded in death by his parents, and brothers, Cecil, Herman and Norman Clark.

His farewell . . . Jerry’s family and friends will gather Wednesday, September 25, 2019, from 10 a.m. – noon, with his farewell service beginning at noon at Borek Jennings Funeral Home, Braun Chapel in Brooklyn.   Memorial contributions are suggested to the American Legion Wilber-Bartlett Post #315 of Brooklyn. Please leave a message of comfort for Jerry’s family at 877-231-7900 or sign his guestbook at www.borekjennings.com.