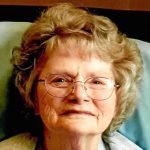 Flavia May Colvin, 91, formerly of Brooklyn, passed away peacefully at Prestige Way Assisted Living in Holt on Sunday, January 12, 2020, under the loving care of the Prestige Way staff and Heart to Heart Hospice. Flavia was born in Muncie, Ind., on January 1, 1929, to Waldon Sr. and Dora (Beckley) Wilkins. She was married to Lewis L. Colvin and they began raising their family in Wayne County before moving to the Brooklyn area.

Flavia worked for many years at the R.L. Polk Company in Detroit and Taylor, retiring as a Human Resources Manager. She enjoyed crocheting, knitting, and sewing; mostly she enjoyed time at home with family and having family dinners together. She was a member of the Church of God of Prophecy.

As was her request, private family services have been held with Reverend David Bolton officiating. Interment took place at Highland Cemetery in Columbia Township.