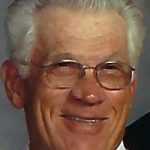 Russell E. Elder, age 87 of Addison, passed away on Monday, December 23, 2019, at the Oasis Rehabilitation and Health Care Center in  Adrian. He was born on December 3, 1932, in Detroit, Michigan to Loren and Julia (Psiuk) Elder. He married Mary E. Spicher on July 19, 1963, in Warren, Michigan, and she survives.

Russell was raised in the Warren area before moving to Pennsylvania. In 1961 he moved to Sterling Heights.  He then moved to the Addison area in 1966.  Russell graduated from Warren High School.  He was a veteran of the Korean War, serving in the United States Navy.  He was formerly employed at Ford Motor Company in Romeo and Woodhaven.  He then retired from the Ford Motor Company in Saline, retiring after 30 years.  Russell then started the Elder Nursery and Tree Transplanting in Addison.

Funeral Services were held at 1:00 p.m. Monday, December 30, 2019, at the Lutheran Church of the Lakes in Addison, with Pastor Tyson Bentz officiating.  Burial took place in Woodstock-Sanford Cemetery, Woodstock Township, Lenawee County, Michigan.  Visitation was from 6-8 p.m. on Sunday at the Brown-Van Hemert Funeral Home in Addison, and from noon until the time of the service on Monday at the church.

Send condolences to the family at www.brownvanhemert.com